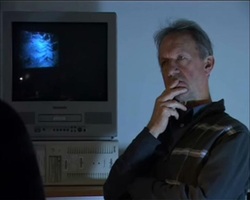 A collaboration exploring being, becoming, humor and engagement between two artists with long careers who have not previously worked together before. Developed over a two-month period at Chisenhale Dance Space.

Both share interests in presence, facilitation and organisational development.

Between is an event for three performers and up to thirty viewers. It explores the tension between visual spectacle and the hunger for intimacy.

An installation performance that premiered on the stage of Bonnie Bird Theatre, Trinity Laban, London on 24th and 25th January 2011 and has been touring venues and galleries in 2011 including Yorkshire Sculpture Park (November 2011).

Between forefronts economy of materials as an artistic position of bareness.  Its ambition is felt in the micro; its weight is felt in the experience of heat between one human and another. Our answer to a financial imperative was to confirm the path we were already on, which is that people yearn for direct and intimate contact from within, affirming the present, lived experience.  The pealing back of skins (clothing/materials) that divide us comes to the skin itself.

At the edge of perception, rhythm marks time. It cuts, flows or disrupts – and creates relationship. Using improvisational structures, four performers create a web of relations with each other, with spectators and with time and space.

Pulse is the work in progress of an exploration on rhythm as ordered variation of changes. It hinges around two relative principles of improvisational compositions: tension/release and anticipation/dissociation. This performance seeks to rehearse the proposition of a navigation between processes of temporal presence and representation. Part of a wider investigation into collaborative practices and choreography, the performance seeks to illuminate some of the complex spatio- temporal relationships in operation in a collaborative structure.